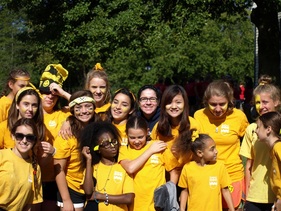 The house system helps the school cultivate the spirit of community on campus. We assign students to one of our four houses, each named after important women and families in Maryland history, all of whom have sterling characters. The house system promotes good relationships among all age groups in the school. Middle and uppers schoolers take on the responsibility of helping younger students fit in and thrive, while elementary school students find a whole family of compassionate “older sisters” who look after their needs. Girls compete in poetry recitations, "open mic" contests, canned food drives, and athletic events to win the House Competition Cup for their house every year.

Bourbon House: Henriette Marie de Bourbon was the youngest daughter of Henry IV of France and married Charles I of England who granted the charter of Maryland to Lord Baltimore. Henriette Marie worked to improve the harsh penal laws of England and nurtured the restoration of the Stuarts after the English Civil War.

Custis House: Martha Dandridge Custis, a young widow, married George Washington. She shared his troubles and hardships while George Washington was Commander-in-Chief of the Continental Army and first president of America. She was a gracious hostess for the President in his public duties and at Mount Vernon when they returned to their private life.

Darnall House: Darnall is the family name of several important women in Maryland history who married into the Calvert and Carroll families (both major branches). Eleanor Darnall was the mother of both Daniel Carroll, signer of the Constitution and Commissioner charged with planning and setting up the District of Columbia, and John, first Catholic bishop of the United States. Her Rock Creek estate encompassed what would become Kensington, where Brookewood School is located.

Throughout the year, Brookewood celebrates various festivals in which members from the houses have a friendly competition. There is at least one festival per month of the year, and they are much anticipated events. Some of the festivals include: